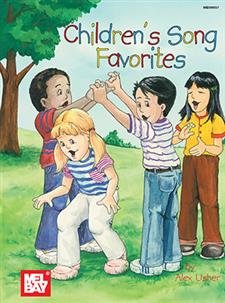 Children's Song Favorites
Children's Song Favorites is a collection of 75 songs for children of all ages, most of them from the folk tradition. They have been collected over more than fifty years by a professional folk singer, who is also a mother and grandmother. Each song has the melody line, complete lyrics and suggested accompaniment chords for guitar or other instrument. Many of them are unusual? for example, all 13 verses of "The Three Blind Mice," "Hail to Britannia" (a British nursery rhyme song), and for older children, "Chopo, My Pony" (a cowboy song), "Old Thompson's Mule" (of minstrel origin) and "The Housewife's Lament." Audience requests have persuaded the author to include two pieces she has written?"The Doll Song" and "The Solution to Pollution." More than three-quarters of the songs involve audience participation, making this an ideal repertory resource for teachers and youth leaders. A few descriptive sentences, sometimes with suggestions for creative activity, precede each song. The songs are arranged alphabetically, and an extra table of contents lists the songs by categories: animals, cowboys and the West, creative activity, dance tunes, history, holidays, quiet time, and teaching. Although this book was designed primarily for children, the author regularly uses many of these songs with grown-up audiences.