This banjo is equipped with Nechville's patented Heli-Mount head tuning system, and both wrenches are included.  With deluxe hardshell case.

It all began with Tom Nechville's dream: a better banjo. He would spend more time tweaking and setting up the instrument than actually playing it. He believed in a better way. Then it hit him: he would create a banjo that held even tension all the way around the head- with a mason jar like tightening system.

This became our patented Heli-Mount frame, which allows easy, quick and simple adjustments. The Heli-Mount frame has been the staple of our product line for over 30 years. The sound of a perfectly tensioned banjo head is remarkable: rich, deep, and sweet. The time spent changing the head transformed from an all afternoon event to a two minute spin.

Since that time in the late 1980's, he has made many other improvements to the banjo. These include an adjustable and removable neck connection that negates the need for coordinator rods. Also a compensated bridge, wooden armrest and radiused fingerboard. These are modern conveniences not traditionally found on the instrument. The result is cleaner sound and easy adjustment.


Similar in operation to a jar lid, the Heli-Mount system produces even tension throughout the banjo head. This takes place in a matter of minutes rather than in an all-day project!

Tightening or loosening the Heli-Mount banjo head is accomplished by turning a single threaded tensioning ring which fits inside the Heli-Mount frame.

Adjustments are made by rotating two Heli-Mount tensioning wrenches that plug into the back side of the tensioning ring. Nechville Musical Products' revolutionary (see what we did there?) one-piece cast metal Heli-Mount banjo frame replaces over seventy miscellaneous pieces of hardware used in the construction of conventional hook-and-nut style banjos. 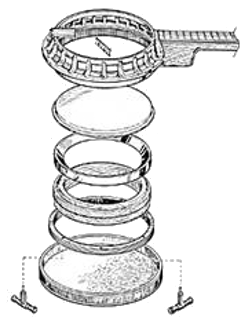